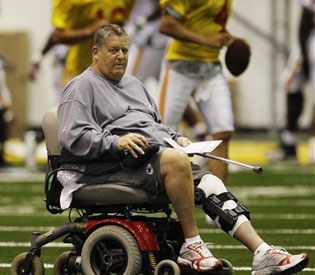 A rumor that came from the Gainesville Sun from reporter Pat Dooley claims that Charlie Weis is headed to the University of Florida to become the offensive coordinator for the Gators.  Pat Dooley, during a radio broadcast from Gainesville instructed the offensive coordinator from Florida to "pull his car over because this is going to shock you", and then announced that Weis could be taking his job soon.

The likely replacement would be Josh McDaniels according to Kansas City sources.  This rumor is at this time unconfirmed and when asked Chiefs head coach Todd Haley said that this was the first that he had heard about the news.  Kansas City Chiefs fans have been back and forth on Charlie Weis' play calling all season, sometimes they like him, sometimes they don't.  But then that's nothing new for Chiefs offensive coordinators.