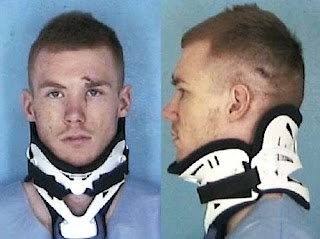 When 25 year old Kevin Funderburk talked his way into the home of an elderly Hutchinson woman on Saturday night, he got more than he bargained for. The woman felt sorry for Funderburk when he knocked on her door and told her he was homeless and had nowhere to go. He was drunk and didn't want trouble with the Police, he told her (so much for that). Once inside, he attempted to rape the 71 yr old woman, injuring her and causing property damage.

She grabbed a frying pan and beats this idiot senseless. When Police arrived, he was unconscious in a puddle of his own vomit. He was taken to a Wichita hospital to get his head stapled back together before being escorted to the Reno County Jail, where he sits with a $55,200 bond. He is being charged with Attempted Rape, Aggravated Battery, Criminal Damage of Property, and Criminal Restraint. He is also being held on an extradition warrant to California. No information is available about what California wants him for.
I think they should just send him to California, let them pay for his incarceration. They will like a nice little white boy like him in Folsom.
at 10:53 AM