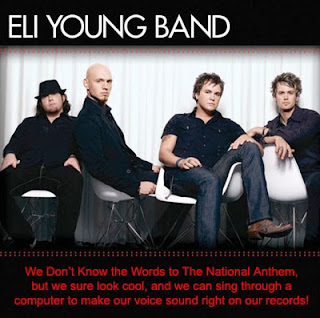 That's BRUTAL!  The Eli Young Band from Texas completely blew the National Anthem at Arrowhead Stadium on Sunday, forgetting the words - TWICE - and screwing up the timing of the jet fly over.  The Chiefs fans were immediately all over this guy, booing and laughing as this poor singer struggled to remember the words to our country's theme.  The singer started off the first line ok, then forgot the second line, added an awkward pause, then did the unthinkable and STARTED OVER with the crowd continuing to boo and yell - this might have been the idea of his band mate who whispered something in the singer's ear.  Why did they have the whole band out there anyway?  The other three members of the band were just standing there doing nothing.  This shows the lack of talent of today's young musicians.  Back in the day when bands had talent, an entire band would NEVER just stand around out there while one guy sang the National Anthem, the entire band would sing - for instance when Huey Lewis and The News performed the National Anthem - now THAT was class.  Take a lesson, young talentless musicians of the Eli Young band, watch that video of Huey Lewis and the News and realize that you guys just got lucky with a lift up from Miranda Lambert.

Note:  The Eli Young band got a free lift from country music industry friend Miranda Lambert when she needed an opening act - ah, the empty, soulless, commercial driven music industry - as long as you're under 25, have spikey super-gel hair and can sing into a computer that fixes your voice, you've got a record deal.  The good news is, the label will be taking all of your money.