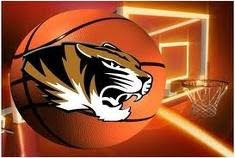 zzou Arena beating unranked, but solid Vanderbilt in overtime 85-82. Marcus Denmon came on strong for the Tigers in the second half only hours after his cousin, Marion died from injuries sustained in a shooting late last Friday. After having an abysmal first half, Denmon scored 19 in the second half and overtime including a layup and free throw to give the Tigers their final three point lead with 5 seconds left. Denmon and his cousin grew up in the same Kansas City house and his death obviously affected his play in the first half. Denmon leads the Tigers in scoring this year averaging over 17 points per game.

A disturbing trend is developing with the Missouri Tigers Basketball team. The last three games have come down to the final play before the buzzer. Last week, Missouri blew a late lead and folded in overtime against a good Georgetown team - then traveled west two days later and let a poor Oregon team back in the game after amassing an 18 point halftime lead (and growing it early in the second half). The Oregon game can probably be chalked up to tired legs, but the Georgetown and Vanderbilt games are signs this team still has work to do. They continue to leave players WIDE open for three-pointers and will continue to be troubled be teams that can shoot the three. Wild swings in games is something we have grown accustomed to as Missouri fans with Coach Mike Anderson's "Forty Minutes Of Hell" style of play, but the Tigers have to play better defense. They probably will, as every Mike Anderson team at Missouri has gotten better throughout the year.

Missouri has now won 51 consecutive non-conference home games. That's pretty cool. Oh yeah, and KU can SUCK IT!
at 8:53 AM