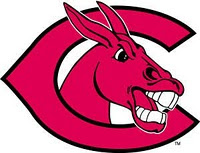 Northwest Missouri and Central Missouri will meet Today in the NCAA Division II quarterfinals. This game is a rematch of the best game in the MIAA this season. The Bearcats defeated the Mules back in November on a last second field goal to give Northwest the outright MIAA title for the five consecutive year. Northwest has also reached the National Championship game in four consecutive seasons and is 18-0 (not counting Championship games) in the playoffs since 2004.

Central will have revenge on it's mind after the heartbreaking loss at home to the Bearcats earlier this season that brought the largest crowd in history to Central's home stadium, more than 13,000. The MIAA title was on the line that day, but this one is for something bigger, a chance win their region and move on to the National Semi-finals. This season marks the farthest the Mules have ever advanced in the playoffs, and is probably the biggest game in their history. It also marks the 90th meeting between the two schools dating back to 1921 with Northwest leading the series 53-34, with 2 ties.

Central's Quarterback Senior Eric Czerniewski leads all of Division II in passing with 4995 yards and 44 TDs on the season -shattering all Central and MIAA passing records, and currently sits #2 all time in NCAA passing yards in a season. That's a lot of yards, can this guy play on Sundays?

The game will be televisized on Metrosprots at 1PM Today (Saturday Dec 4, 2010)