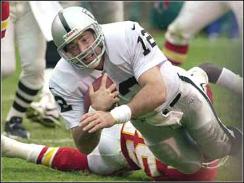 A petition has been started in Kansas City today to ban the services of Rich Gannon from commenting during televised Kansas City Chiefs games.  Chiefs fans claim that Gannon is extremely biased towards the Chiefs and demonstrates this bias throughout his commentary of televised Chiefs games.  Gannon consistently "talks up" the Chiefs opponents and downplays the Chiefs success, often pointing out the strengths of Chiefs opponents and what they need to do to beat the Chiefs.  Most notably, Rich Gannon comments on how talented the opposing team's quarterback is, and how they can exploit the Chiefs defense.

Kansas City Chiefs fans are publicly expressing their dislike for Gannon's commentary, both on broadcast radio, print and online fan sites.  Although exact details of Gannon's departure from the Chiefs is somewhat cloudy, it is obvious that he and the Chiefs parted ways on very negative terms.  The fact that Rich Gannon went to play for The Oakland Raiders, Kansas City's biggest rival, demonstrates this.

To sign the petition to ban the commentating services of Rich Gannon, please visit:

go fuck yourselves you fucking whinny faggots. if you want to put a ban in place , place it against marty shitenheimer -- he's the one who pulled gannon from the playoffs in 98. don't blame gannon just cause he had a series of shitty former coaches. and yes, i'm a lifelong raiders fan.

Yes, we can tell that you're a Raiders fan by your hideous spelling and grammar. Now go back and finish high school like a good boy and we will give you a biscuit.