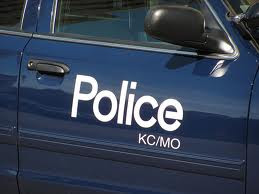 Late Wednesday night a man was fatally shot by a Kansas City Missouri Police Officer. The incident started with the Officer noticing a driver on 71 Hwy driving erratically without headlights. Lights, Sirens, Chase ensue. Now dead criminal doesn't stop, of course - pulls into driveway at 7107 Agnes (nice neighborhood) and proceeds to run towards the front door. Cop catches him before he can get inside (must be one of our more in shape cops) - a struggle starts, crackhead (allegedly) reaches for his gun. Not fast enough; KCMO Police Officer shoots him first. The officers involved in the shooting have been placed on paid administrative leave per Department Policy. This is the second incident in about a week. A Ruskin Heights man was killed last week by Police after refusing to drop a pole (curtain rod, whatever) and rushing police after robbing a house.

From just the initial description of the incident, it sounds like this cop really has his shit together. He catches the guy before he can get inside (his?) house, and draws his weapon before dead dirt bag can. Nice job indeed! And we save the money of a trial and housing the prisoner. But seriously, another incident that highlights the dangerous job our Police Officers face everyday. I know they are irritating when they write you a speeding ticket for going 7 over, but they really do deserve our thanks.

Cue nasty comments from friends and family of the dead man claiming that cops love to shoot innocent people, and dead guy was such a great person and father, etc...
at 11:08 AM

You probably won't get any nasty comments until you post this guy's actual name - then you'll get 'em son.