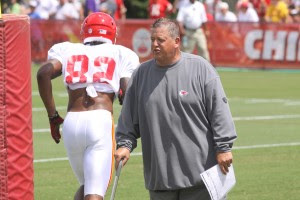 The Jekyll and Hyde Chiefs let off a stinker at Arrowhead on Sunday. The Raiders came into our house and punked us 31-10. The offensive line was offensive, and the defense was defenseless. The Raiders gashed the Chiefs defense to the tune of 209 rushing yards - all that without the Raiders leading rusher Darren McFadden who was inactive with an injury. Every time we got them in a position where we could get the ball back, they squirmed right out. Either with a great passing play and catch, a penalty, or the ridiculous 21 yard scramble by Jason Campbell on 2nd and 18 that led to the Raiders first TD.

Though there was enough blame to go around, the Offensive Line can probably shoulder more than anyone else with a performance that can be described with many foul adjectives. Cassel ran for his life all day (sacked 7 times, and threw 2 picks), and few holes were opened up for the running backs.

I will give the Raiders credit, they came in ready to play and wanted to show the Division that they were the best by becoming the first team to go undefeated in their division and not make the playoffs.

It was rumored over the weekend that Charlie Weis would be Leaving the Chiefs to go to the University of Florida next season. That information was conformed last night. The decision seems peculiar on the surface, but as more information comes out, it makes perfect sense. Weis's son will be attending the University of Florida next year and would like to get into coaching. He will be a Student Assistant with the Gator Football team, and Charlie will get to spend some time with his boy and help him get a foot into coaching.

This team seems to have a fragile psyche, lets just hope their ready next week for the Ravens, they will need to be.
at 8:15 AM