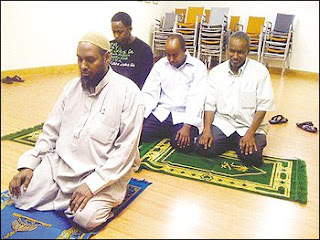 This was news to me, but during a brief business trip across the great state of Kansas I overheard the locals complaining about the increasing number of Somali immigrants relocating to the cities of Emporia and Dodge City.  Apparently, the main complaint about the Somalis is that they are terrible drivers.  For some reason, the State of Kansas (among other states) provides a special driver's license test to any immigrant in America who cannot speak English.  This driver's test consists of only pictures, and no text.  Immigrant applicants taking this special test must only be able to navigate through the test by selecting pictures.  States who have remedied this situation by requiring an English-Only driver's license test (awesome idea) include:  Oklahoma, Arizona, Hawaii, Maine, New Hampshire, Utah, Wyoming and South Dakota.  Missouri attempted to pass the English only exam in 2007 with no success.

The largest culprit in the importing of Somalis to America and Kansas, specifically, is Tyson Chicken.  A decade ago, Tyson Foods, Inc. had Federal charges brought against them for their illegal immigration hiring practices.  Tyson Foods in Emporia, Kansas brought in over 700 illegal Somalis to work at their factory.  This brought about serious civil unrest as the Somalis were not educated on American laws and customs before they were "planted" in Emporia and surrounding communities, and to make matters worse, many of the factories where the Somalis work allow them to worship the Holy Qur'aan (Muslim Jihad Crap) during work and even provide them with private "praying rooms".

The Somalis travel in large groups, which is a custom in their country for safety reasons, and they were involved in over 100 auto accidents in less than a year of arriving in Emporia, including smashing into several buildings with their cars.  There were also reports of Jihad activity, as Somalis are Muslims, and there were even reports in Tennessee that Somalis wrote on the walls at a Tyson Chicken plant that "All Americans Must Die".  Another company that has recently aided the immigration of several hundred Somali workers is National Beef in Dodge City, Kansas.

Overall the Somali immigrants seem to be fairly harmless, more or less just misunderstood and they equally misunderstand our laws and customs - one report states that a group of Somalis in Emporia, Kansas went to a China Buffet and after finishing their meals returned their uneaten food to the public buffet bins!  Now, of course, this shows that the Somalis did not want to waste food and was overall a nice gesture, but it just shows the difference in their customs vs ours.

I suppose that as long as the Somalis that America is importing into our country don't turn "Jihad" on us then the only negative result will be yet more American jobs lost to immigrants.
at 3:38 PM

I must confess I enjoyed reading this blog until I came across this article - which screams xenophobia and islamophobia.

I mean - I'm not muslim, but it's incomprehensible to call the Qur'aan "Holy Jihad Crap." Please, I urge you to respect other cultures and beliefs as much I you'd demand respect for yours.

Mutual respect is the name of the game.

Thanks for voting on www.zuzeeko.com.

Mutual respect should be the name of the game, and so should assimilation. Problem with some of the lesser Muslim nations is their complete lack of desire to assimilate. In Noel, MO, where there is a sizable segment, they treat the local women terribly. For them, their sexism is unassailable as it is written in their koran. Stated simply, the koran is as stated, and the best muslims are jack muslims, one that adhere the best parts, and ignore the rest of the crap therein.