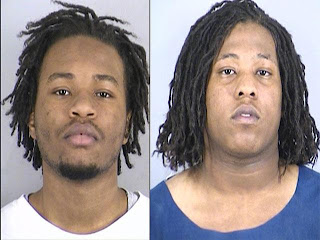 Karma's a bitch. These two fine looking gentleman to the right were caught by Kansas City Police Thursday stuck in the snow in a stolen Chevrolet Suburban. Darion Page, Michael Taylor (yes, that is a man), and an unidentified Juvenile have been arrested in connection with a series of robberies Wednesday and Thursday. The suspects would roll up on folks stuck in the snow, pull a gun and rob them (nice).

On Wednesday evening they robbed a preacher at 85th and Prospect after the preacher and another man freed the vehicle from a snowbank, these two thugs stole the Suburban as well. Another stranded motorist was held up at on Hillcrest near 103rd st. While Police were responding to that robbery, they happened upon the suspects, themselves stuck in the snow. While being interviewed, Page and Taylor both admitted being present during the robberies, but blamed the holdups on the 16 yr old juvenile. The juvenile did not make a statement to Police - he's probably the smartest one in the bunch.

I hope the courts aren't too hard on them, I'm sure they were just short on money for college tuition for next semester.
at 7:48 AM

The "thing" on the right is a GUY? No way. That looks like Aretha Franklin on Crack.