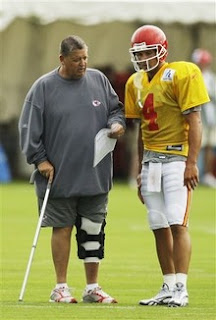 Although the reasons are somewhat a mystery, Chiefs offensive coordinator Charlie Weis is officially taking the "demotion" job as offensive coordinator in Florida.  Todd Haley claimed to have no knowledge of this move when interviewed on Friday, but this was clearly not the case.  Haley probably just didn't want to disrupt the upcoming Chiefs / Raiders game any more than it already had been.  There's no doubt that the Chiefs were troubled by the rumors that circulated about Weis' departure, and could have been a contributing factor in Sunday's loss.  Haley claims that Weis is going to Florida to be with his son, who is also involved in the Florida football program.  Kansas City sports analyst Jack Harry said after the game today that he believed that Haley "forced Weis out because he is looking over his shoulder (Haley) and fearing for his own job".  Leave it to Jack Harry to tell it like it is!  Well, except for our site - we REALLY tell it like it is - but then again we don't have to worry about the FCC either.