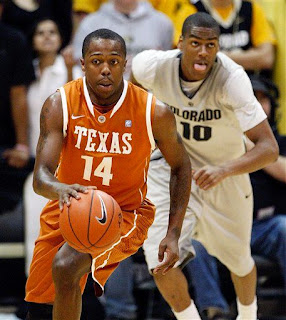 As the Big 12 season winds down, several teams are trying to make a push for an NCAA Tournament bid and an opportunity to move up the Big 12 standings. No team made a stronger push than the Colorado Buffalos, who shocked Texas 91-89 and got back on the tournament radar. Colorado was down by 22 in the first half and found itself in a 48-33 hole at halftime, but was able to rally back thanks to Alec Burks' 33 points. The win saved Colorado's season, and puts the Buffs in a position to crash the big dance with a strong finish.

At the moment, the Big 12 has four tournament locks in Kansas, Texas, Texas A&M and Missouri, while Kansas State's win over Mizzou on saturday pretty much guarantees the Wildcats will be dancing in March barring an epic collapse to end the season. The Big 12 could easily get in a sixth and possibly even a seventh team in, the question is who? Nebraska was unable to carry any of its momentum from a huge win over Texas into its next two games, and now finds itself outside of the tournament picture at 6-8 in the conference. That leaves Baylor and Colorado, who are both 7-7 in the conference and have 18 wins overall. Colorado has the easiest road, with its last two games against Iowa State and Nebraska. Two wins to close the regular season and a strong Big 12 tournament performance might be enough for Colorado to sneak in. Baylor has a tougher schedule: an away game against Oklahoma State and then a home contest against Texas. It won't be easy, but a victory over the Longhorns would probably be enough to get the talented yet inconsistent Bears in the tournament.

Another factor to keep in mind is the Big 12 tournament, which should be better than ever this year with so many teams fighting for a postseason spot. With Kansas and Texas left with nothing to play for except a one seed possibility and the parity in the league this season, this could finally be a year that a team left for dead makes a run and wins the tournament. If a low seed wants to win it all though, it will likely have to go through Texas and Kansas - not exactly the easiest path to March Madness.
at 12:02 PM