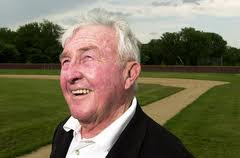 Kansas City icon Bill Grigsby died on Saturday at the age of 89. Anyone who was a Chiefs fan will never forget "Grigs" on the radio broadcasts with his "old pal Leonard" Dawson. He was a broadcaster for the Chiefs for 46 years calling both Super Bowls the Chiefs were in. In total he was a broadcaster for more than 60 years getting his start in his hometown of Joplin, MO calling minor league baseball. He then moved to Kansas City and worked for the Kansas City Athletics ball club before joining the new AFL franchise that had just moved to Kansas City.

Bill Grigsby suffered from several medical problems over the last few years, he retired from the Chiefs in 2009 with his health deteriorating. He was diagnosed with Prostate cancer later, and suffered a broken hip last fall. The Chiefs honored him last season with a pregame ceremony on the field. He published his Autobiography in 2004.

I never met the man, but from all accounts he was a nice guy. He certainly had lots of energy - that would come through in his broadcasts, and he really seemed to enjoy life. I sure will never forget how he growled out the words "Prrriiccee Chhoopper" for his drop ins during Pre and post games. That's the best advertising Price Chopper ever got. It was certainly always a beautiful day when Grigsby was around! We should all be so lucky to live a long, happy life.
at 10:33 AM