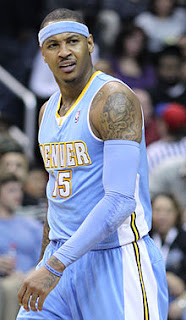 After a day's worth of back and forth between Carmelo Anthony, The Denver Nuggets, The New York Knicks and "set up" team The New Jersey Nets, Anthony signed on the dotted line with the Knicks.

Carmelo Anthony wanted out of Denver. They offered him a 3 year, 65 million dollar extension and he declined. Now that means that you want out! Speculators feel that the involvement of the New Jersey Nets in this trade was just Camelo's agent using leverage against the Knicks to get a better deal.

There's a story that at Carmelo's wedding during the toasts, several NBA players, including New Orleans Hornets guard Chris Paul, mentioned that Anthony should leave the Nuggets for the Knicks and Anthony did not dismiss the idea.