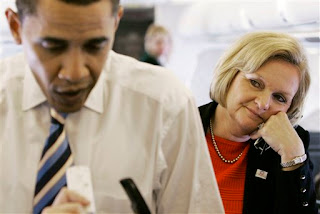 Missouri Senator Claire McCaskill is denying reports that she urged the Democratic National Committee not to hold their 2012 Convention in St Louis. New York Times Blogger Jeff Zeleny wrote Tuesday that McCaskill "took her concerns straight to the White House, according to party leaders familiar with the selection process." McCaskill reportedly had concerns that the convention would draw protesters and potentially "complicate" her re-election bid. Basically, she didn't want to be seen on the stage with Obama, who is not really highly regarded in Missouri. She also feared the Convention competing for fundraising dollars in the State.

The accusation that Senator McCaskill argued against a St Louis convention could be potentially damaging to her reputation in Missouri. These kind of events typically bring in MILLIONS of dollars, and I don't mean just a few, try a couple hundred, into the local economy. Also, her union friends might not be very appreciative seeing how Charlotte, the chosen sight for the 2012 convention, has no union hotels. The actions of the Senator will no doubt be seen as selfish to her constituency in Missouri.

On Wednesday, McCaskill told the Associated Press that the story was false. Mr Zeleny responded that his report "speaks for itself". Who to believe in this sordid mess? A lying politician, or a reporter for the most liberally biased newspaper in the country, that's a tough call. Personally I think her support of Obamacare and the so called stimulus package has her doomed anyway.
at 1:27 PM

It would not be the end of the world to see Claire McCaskill (McBuzzKill) get the boot from Missourians. Whether or not this story was true I don't know but I know that I still shudder when I recall the press coverage of Obama's victory and her big head coming through my TV yapping like some crazed wet dog. My God that woman is irritating.