First Border War of the Year Could be a Lopsided Affair 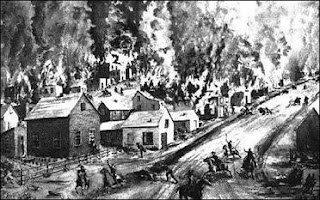 On August 21, 1863, Captain William Quantrill and his band of raiders sacked, burned, and murdered in the city of Lawrence, KS as depicted in the photo. The Missouri Tigers will come to Lawrence this evening with considerably less firepower than Quantrill did 150 years ago. Though formidable at home, the Tigers have been less than stellar on the road. Missouri has only won one true road game, and that was against a woeful Oregon team, the Tigers are 0-4 on the road in Conference Play including loses to unranked Colorado and Oklahoma State.

Mizzou has not won in Lawrence since Norm Stewart's last year in 1999. That's fitting because no one took the rivalry more seriously than Norm did. Of course, he famously would never stay the night in the State of Kansas, choosing instead to stay in Kansas City and driving over for the game in the morning.

If Missouri is to have a chance tonight, they need to shoot the ball well and get to the free throw line. In Mizzou's last road game against Oklahoma State they were out shot at the line by 43-16. That's not going to win you many games. On a bright note for Missouri, Josh Selby appears to be out for the game, and there is no way Brady Morningstar scores 19 again. As much as it pains me to say it, I still think the Jayhawks win big tonight, they just have too much talent for the Tigers to overcome on the road. They can still SUCK IT though!
at 10:01 AM

Hey, it's better to be the underdog sometimes. Maybe good ole Mizzou will surprise us tonight! KU fans are soft and dorky. Kansas has to "import" their black players from Kansas City, MISSOURI anyway, so they are actually Missouri players. Last I checked no KU players were coming from Leawood schools.

Mizzou would definitely beat Kansas in a street fight :)