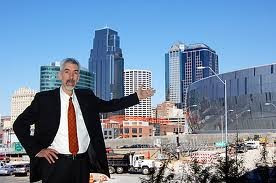 The Kansas City Mayoral Primary will be held on Tuesday. Mayor Funkhauser will face five others to narrow the race down to two. The top two vote getters will face off in the March 22nd General Election. The candidates, in no particular order are:

Henry Klein - Klein has lived in Kansas City for more than 25 years and has no direct experience in local Government (that's probably a good thing). He ran last time around and received just over 1% of the vote in the primary. His big issue is crime and the fact that Kansas City is more dangerous than 98 % of US Cities. Klein doesn't stand a chance, which means he is probably one of the better candidates.

Deb Hermann - Two term City Councilwoman from the North of the River's 1st District. Will probably show well in the Northland and has decent name recognition. She is big on "neighborhoods" - whatever that means. She also stresses the importance of basic services. Hermann is a possible top two finisher.

Jim Rowland - Former City Councilman and current Executive Director of the Jackson County Sports Authority. Don't know the man, but seems that one should quit their job working for the county Sports Authority before they run for Mayor if they want to seem serious. Also I have heard he is an asshole. Besides their are too many white candidates for Rowland to be successful.

Sly James - Former Marine and Successful Personal Injury Attorney - I'm not really a big fan of personal injury lawyers, but he seems like an OK guy for a Democrat. Besides, he's the only black guy in the race - if he can get black people to the polls, he will do well - just ask Emanuel Cleaver.

Mayor Funky - Well we all know the very public tribulations of our current Mayor. Personally, I like the guy. Seems to me he told everyone he was not a politician, got elected, proved he wasn't a politician and then every one's pissed. I think the city has actually made progress. If it wasn't for his wife, we might be talking about a different race. I'd like to think he can make the top 2, but I'm kind of a cranky bastard pulling for another cranky bastard.

Emanuel Cleaver and Sly James, yes, I can see that they would do great things for our community. Great things.