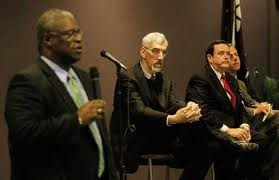 Kansas City's Mayoral primary is over - with historic, if not necessarily surprising, results. Mark Funkhauser will be the first Kansas City mayor in over 80 years not to enjoy a second term. The current mayor finished a fairly close 3rd overall in a field of 6. Jim Rowland finished 4th, with Deb Hermann finishing a disappointing 5th place. Henry Klein got a few more votes than did Charles Wheeler - of course Wheeler bowed out of the race more than a week ago, but it was too late to remove him from the ballot. Mr Klein should spend his time more wisely in the future, running for Mayor is not a very productive pastime for him.

Who are the 502 people that voted for Charles Wheeler anyway? Almost nobody bothers to vote (50,000 voters out of 230,000 registered in the city) in these municipal primaries, and usually they are the more informed among us and they still voted for a man that dropped out of the race? I guess you can't fix stupid.

Should be a good race between Burke and James. Both seem to be nice enough guys despite both being attorneys. Burke probably holds an edge with the endorsements he has received and hi "experience" in city government. Experience is overrated and Sly James will tout the fact that he is an outsider - this plays well to some, and of course being black will help in the inner city. Besides, it would be cool to have a mayor named Sly, wouldn't it?
at 9:41 AM