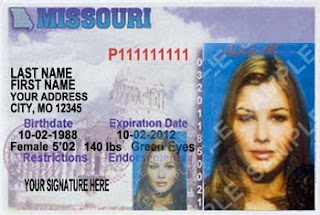 The Missouri Senate passed SB3 today. The so called "Voter ID" bill requires a Missouri or Federal Government Photo Identification to vote. The Legislation is contingent upon a Missouri Constitutional amendment being passed, so this is really the first step in a long process. The bill passed by a 26-7 vote. The State Supreme Court struck down a similar law in 2006 - that's why this time around a Constitutional Amendment will be necessary.

Liberal Democrat Senator Jolie Justus tweeted soon after the vote that the Missouri Senate just "voted to disenfranchise at least 230,000 voters" . I can't imagine why anyone would oppose a law like this until I put myself in the shoes of a Democrat. You see, Democrats need the votes of people who can't get, or are too lazy to get photo IDs. Illegals for example, can't get a legitimate state ID without proper paperwork. Dead people, another Democratic voting bloc, also can't provide proper photo IDs. Then another thing occurred to me - who are these 230,000 Missourians who don't have a photo ID? And how on earth do they conduct business on a day to day basis? Can you get a job without ID? Receive Government benefits? Open a Bank account? I'm sorry, but I can't imagine 230,000 Missourians without any photo ID. Are they counting Children? What a bunch of losers.

Incidentally, did you know you can get a fake ID on the Internet? Holy shit, that's cool - a lot of things have changed since I was of the fake ID age, man I'm getting old.
at 1:49 PM

That's a good question. Where are these 230,000 people without IDs? And what are they doing? They must be dealing drugs or working for cash mowing lawns or something. I don't think that a lot of the folks in the ghetto need bank accounts, thus all of the check cashing stores in the hood, so that explains that - but every job I've ever had took a copy of my driver's license straight away. Jolie Justus must be a complete idiot.

Jolie Justus is a Lesbian said...

I Jolie Justus is just plain out of place. Is she someone's niece or something, like a judge or member of the Senate, I mean how in the heck did she get that position? It actually scares me that someone like Jolie Justus holds any office whatsoever in our government. What a frightening apparition she is!