Missouri's Struggles, Parity in the Big 12 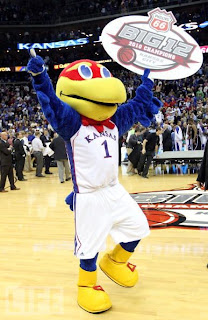 Before the Big 12 season kicked off, the Missouri Tigers looked like a team finally ready to contend with KU for the Big 12 title. Last night, Oklahoma State beat Missouri 76-70, dropping the Tigers to 3-4 in a Big 12 that is officially now a two-team race.

The current Big 12 standings feature two familiar faces at the top: Texas and Kansas. The Jayhawks have won the league six straight years, and seem to be playing their best ball at the moment. Texas, the only team to give the Jayhawks a run for the conference crown in recent memory, is the hottest team in the nation. KU and Texas are clearly the best two teams in the conference, and once again will battle until the end for the conference crown.
While it is no surprise the Jayhawks and Longhorns are off to fast starts, the parity in the rest of the league is shocking. Consider Texas A&M and Oklahoma (yes, Oklahoma) are tied for third place with a 4-3 record, while Oklahoma State, Kansas State and Texas Tech are tied for second-to-last with a 3-5 record. The league has never been this close, and it still remains unknown who will emerge as an NCAA tournament team from the cluster.
Many schools who were expected to struggle have recorded upset wins (Oklahoma, and Texas Tech) while teams like Baylor, Kansas State and Missouri haven't come close to meeting expectations. While the next weeks should bring some separation, it is clear that once again, Kansas and Texas are on a different level.
at 9:10 PM