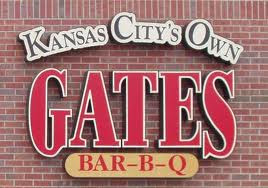 Wednesday night Kansas City Police set a Command Center in the parking lot of a Gates Bar-B-Q on Emanuel Cleaver Blvd (I can't believe we named a street after him). Five blocks away, police were trying to get an armed suspect out of a house in the 4400 block of Wayne Ave (nice hood). For a couple of hours, Ollie claims, Police scared off customers and basically make a mess of his parking lot costing him $3300 in business in his estimation. He called Mayor Funkhouser who promptly came down to have a look, and probably a complimentary Mixed Plate. How cool would it be to make a call to the Mayor of a major City, probably on his cell phone, and have him rush down to your restaurant on a cold Wednesday night. That is how much influence Ollie Gates has in Kansas City. And rightly so, he has successful businesses in the inner city, something the City desperately needs more of.

Though the cops were doing their jobs, and I'm sure they never gave a thought to it, they could have found a better place to set up their command post. They were five blocks away form the scene, so it's not like they had to set up there, it could have been any number of parking lots of closed businesses. With the influence Ollie wields, I'm sure they won't set up in the Gates Parking Lot again.

In that neighborhood, no doubt business was lost. I'm sure a good percentage of the population down there wouldn't come within a half mile of a Police cruiser if they can help it.
at 3:37 PM

Yeah, that's a tough one. Ollie is also on the board of many Kansas City committees, and probably does have the mayor's cell number. The police need to be able to set up on private property if an emergency is in affect, but you're right, there are several empty parking lots around that area since it's impossible to keep anything in business in the poor sectors except check cashing places, liquor stores and pawn shops.