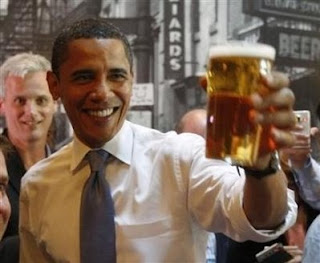 President Obama and Bill O'Reilly sit down and discuss politics, policy, the pressures of being the President and or course, the Super Bowl.
by Kansas City News

The interview between Bill O'Reilly and President Obama during the Super Bowl pregame show showed us a side of Barack Obama that seems a little tired of being president.  Who could blame him?  When asked what the hardest part of being the President was for him, Barack replied "well, the fact that I'm sitting here wearing a sport jacket on Super Bowl Sunday."  I did not vote for Obama, and it is pretty clear that the writers of this blog are not Obama or Democrat supporters in majority.  But I must admit that I'm starting to like Obama as a person.  I don't like everything that Obama sends down the wire politically, but just like former President Bush, Obama is starting to look like a guy that just wants to hang out with his friends, drink beer, smoke a cigarettes, and just rap about guy stuff.  I'm all about that.

Obama looked irritated and weary during the interview, and he made it clear that he would rather be doing something more casual.  He quickly answered Bill O'Reilly's questions almost before they even came out of Bill's mouth, cutting O'Reilly off often and obviously trying to hurry through this interview.  On the other side, it was clear that Bill O'Reilly was trying to make more of the interview than necessary, probably for ratings or whatever, and tried several times to "bully" Obama.  Bill even mentioned gravely and snobbishly that Obama wasn't wearing a tie.  There's conservative, and then there's irritating asshole - and I think that Bill O'Reilly is definitely leaning toward the latter.  Here's a little piece from the interview:

O'Reilly:  "Does it bother you that so many people hate you?"
Obama:  "The people who dislike you, don't know you.  It's that simple, what most people hate about me is whatever "fun house mirror" image of you that's out there.  You don't take it seriously.  To get to be the President in this country you have to have pretty tough skin."

O'Reilly:  "What is the thing that has suprised you the most about this job?"
Obama:  "The thing that you realize intellectually after actually taking office is that every problem that comes to my desk has no easy answer.  All of the easy problems get solved somewhere else down the line.  The problems that make their way on to my desk either have no answer at all, or they require me to make a decision that is going to upset someone or disrupt some part of industry or business."

Obama ends the interview by pointing out something that my father (a man who's intelligence level I have never encountered outside of my home) pointed out to me after I was disappointed in Obama's election.  What my dad and Obama pointed out was that "although we fight back and forth over issues in this country, with Democrats and Republicans, left and right, whatever, America has a common sense of decency that makes me optimistic about our future even on the worst days."  This statement is my new political affiliation, and from now on I'm going to believe that Americans are mostly good at heart and that eventually they will come together and steer the country in the right direction.
at 4:59 PM