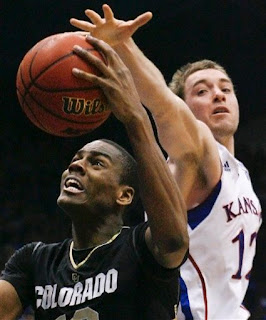 Heading into Saturday, we knew that this weekend would go a long way in shaping the Big 12 race. Several teams made a big push for why (or why not) it should make the NCAA tournament, while the Big 12's top team finally suffered a league loss.
No one gave Nebraska much of a chance against the seemingly invincible Texas Longhorns, however the Huskers knocked off the Big 12's top team in Lincoln, 70-67. No one goes undefeated in Big 12 play (the only team to ever accomplish the feat was Kansas in the 2001-2002 season), and Texas still has a one game lead over KU. However, Kansas' rout of Colorado showed that the Jayhawks are not going silently into the night, and the Big 12 race should go down until the final week of regular season play.
Speaking of the Huskers, no one gave its NCAA status a bigger boost than Nebraska did on Saturday. Now at 18-8 overall and 6-6 in the Big 12, Nebraska has a huge victory to add to its overall profile. The Huskers' last four games include KState, Iowa State, Missouri and Colorado, plenty off opportunities for Nebraska to grab a tournament spot with a strong finish.
KState, Missouri and Texas A&M all picked up wins, and at this point it appears that the Aggies and Tigers are locks for the Big Dance, while KState is a few wins away. The biggest mystery team continues to be the Baylor Bears, who somehow lost at home to Texas Tech and fell to 6-6 in the league. After a poor non-conference slate, Baylor's average league showing has put the Bears in trouble. Baylor's final four games feature three ranked opponents, and the Bears will likely need to win at least three of these games to get into the tournament.
at 7:18 PM

Rock Chalk! We should get the win tonight over the Okies. Would love to see KU vs. Duke. Wonder why Tyshawn Taylor was suspended?