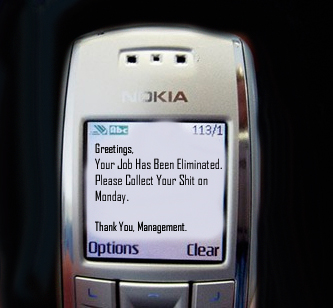 The Wells Fargo Bank auto loans division closed abruptly on Thursday, February 5th, without notice to it's 192 employees who are now out of a job.  A friend of mine had worked at the Wells Fargo branch for 5 years and do you know how she got the news?  By TEXT MESSAGE.  That's right, she's sitting there enjoying a nice evening when she gets a text message telling her that she is now unemployed.  A severance package was offered to her and they have sent home an agreement for her to look over.  It appears at this point that compared to what the severance package offers, good old fashioned Kansas City Unemployment Benefits may be the better choice.  Might as well follow the trend, Kansas City lost more jobs in 2010 than any other city, somewhere in the neighborhood of 7,700 jobs lost.  The severance package agreement explicitly states that the closing of the Wells Fargo division be kept confidential.  I hesitated to write this report but then saw that the Star had already reported this news last week.  The majority of the employees at Wells Fargo were black females who no doubt raised a public ruckus, thus the news got to the Star before the company released an official statement.

Security guards were present when the employees went to collect their belongings on Monday and there was no advance warning of the closing whatsoever.  This may be good news to anyone who is in arrears with Wells Fargo, as the branch that they closed was mostly used for collections and skip tracing personel.

Ah, the stories that the employees of Wells Fargo collections must have enjoyed over the years when they made their collections calls.  (Person receiving the collections call speaking in deep ebonics) - "Yeah, but uh, see dat car is in my mamma's name" or even better "Ah, yeah, but uh, dat car be in my cousin's name".  (Play video for sample).


Probably not the greatest job in the world to have but at least it was a job.  Looks like Kansas City is off to another record breaking year of lost jobs in 2011.  That's the first time I've ever seen anyone get an elimination notice by TEXT MESSAGE.  Good stuff Wells Fargo, good stuff.
at 7:07 PM