What the Chiefs can Learn From The Packers 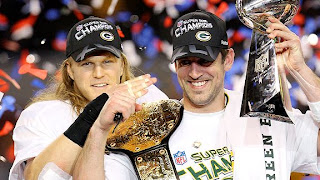 The Green Bay Packers won the Super Bowl as Chiefs' fans, players and coaches watched from home, victims of a playoff loss to the Ravens in the wild card round. While the Chiefs are still in a rebuilding mode and just making the playoffs was a huge step forward, the NFL is about winning titles, and the Chiefs could learn a few things from the champion Packers in Kansas City's hunt for a title. The Packers are champions due to three critical components: A team built from the draft, a stout defense that keeps it in every game and an elite quarterback. Lets see how the Chiefs stack up in all three categories.

The Packers draft well year after year, and the result has been a sustained period of success for the green and gold. The Packers draft well in all seven rounds, which has helped the team register a winning season in all but two campaigns in the last 20 years. When the Packers took the field on Sunday, 18 of the team's 21 players had been drafted and groomed by Green Bay. The ability to mold players into your system from the time they enter the league is critical in the NFL, and while the Chiefs had a fantastic draft last year, they still have some work to do after a few lackluster efforts in the past five years. Pioli and co. had a good start last year, but it will be important for the Chiefs to continue to build through the draft to sustain the success it started this year.
The Packers defense has been great all year, and despite losing future hall of fame CB Charles Woodson in the first half, held the Steelers off just enough to help the Packers get the win. You need a defense that will keep you in the game even when the offense stalls, and Green Bay had this all season long. This is where Kansas City has made huge strides, and better yet, the Chiefs defense is very young.
The final reason the Packers are champs is simple: Aaron Rodgers has morphed into one of the deadliest QBs in the league in three seasons as a starter. Matt Cassel had a very good season this year, but failed to play well in some of the Chiefs' biggest moments. The list of recent super bowl winning QBs is a whos-who of the NFL's best: Rodgers, Brees, Roethlisberger, Manning, Brady, etc. A QB needs a good WR corps to be successful, and the Chiefs still need a lot of help at this position. With one of the league's top rushing attacks, the Chiefs offense has the ability to be potent, but until Cassel and his WRs turn into among the league's best, the Chiefs will be unable to win football's biggest prize.
at 7:07 PM