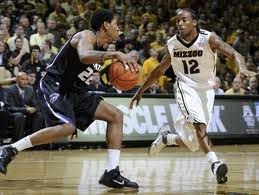 Wins by both Kansas State and Missouri on Wednesday sets up an intriguing match up this Saturday in Manhattan at the Octagon of Doom (still the world's stupidest nickname for an arena). Kansas State has been on fire of late winning 5 of their last 6 since being blown out in Lawrence - including an impressive victory over Kansas.

Mizzou has also won 5 of their last 6, but have just recently picked up their first Conference road win over an abysmal Iowa State team. The Tigers won the previous meeting between the two schools earlier this year in Columbia.

A Missouri victory this Saturday will strengthen their position in the top 4 of the Big 12 Standings and a first round bye in the Conference Tournament, and earn them more respect nationally with an impressive road win. A victory by K State, I think would almost assuredly earn them a spot in the NCAA tournament. Missouri is surely in at this point with 22 wins and a guaranteed Conference Record of at least .500 - not to mention undefeated at home (so far).

For Missouri to pull off the victory they will need great efforts by their big men. The three forwards (Ratliffe, Bowers, and Safford) combined for 40 points and 25 boards against Baylor Wednesday night. They will need a repeat performance to knock off K State on Saturday night.
at 10:45 AM