Bill Self Named AP Big 12 Coach of the Year 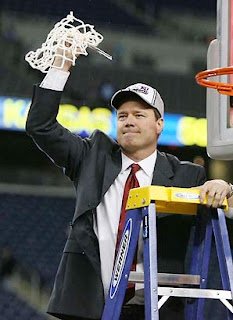 For the second time in the past four seasons, Bill Self's Kansas Jayhawks were not picked to win the Big 12 in the preseason polls. Both times, KU posted a 14-2 Big 12 record and won the conference outright, and the latest Big 12 title has won Bill Self another AP Big 12 coach of the year award.

Apart from winning a national title in 2008, Self's teams have often come up short in the NCAA Tournament. However, his regular season success at KU is rediculous: KU has now won at least a share of seven straight league titles. Self's teams have a huge advantage at home in legendary Allen Fieldhouse (where the team recently won 69 straight home games), but it is the Jayhawks road success that really seperates KU. In Selthe past seven seasons, Kansas has gone 7-1 on the road in conference play three times (no other team has done it once), and has a 43-13 road record overall. That mark is better than any other Big 12 team's home record except for Texas. Any average coach and average team can be good at home - just look at Missouri this season. It takes a special team and a special coach to consistently win on the road, and that is why Self is once again recognized as the league's best.

The only knock on Self is that he has only been to one Final 4 (where his team did win it all), and that his teams often bow out early in the NCAA Tournament. I think most fans need to give him time to bring in some more serious hardware, and appreciate the league dominance we have seen recently. As long as Self is at KU, no one should pick against the Jayhawks winning the league. It will just make winning awards like these even easier.
at 6:00 AM

Email ThisBlogThis!Share to TwitterShare to FacebookShare to Pinterest
Labels: Bill Self, Bill Self coach of the year, Bill Self coaching, bill self on tyshawn taylor, KU basketball ranking, KU seven strait Big 12 titles

Self has really done great things. Let's hope that we get a win tomorrow. I wonder how many people are going to take a "long lunch"...