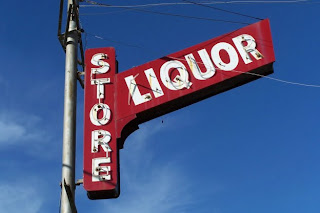 Liquor store owners in Kansas fear a bill in the Kansas Senate will force them to close their doors. For those lucky folks out there who don't frequent the state of Kansas, the liquor laws of the State are quite archaic. Beer (except 3.2%), wine and Liquor can only be sold in Retail Liquor Stores - and those stores can only sell products with alcohol in them - no lottery, cigarettes, mixers, nothing but booze. In fact, some stores, to get around these ridiculous regulations actually have a separate cash register in a different room to sell cigarettes and mixers in. The clerk finishes the liquor transaction and then walks to the other room to do the second transaction - completely idiotic.

Kansas SB 54 is trying to change all the nonsense. Liquor store owners are all twisted about the possibility that the false market for all those small liquor stores in Kansas is about to be squashed. You can't blame them, but it is for the common good of the consumer and the Kansas economy in general. Besides, the Kansas Senate has put in a nice provision to help. The bill stipulates that for 3 years after it goes into effect, there can be no increase in Class C Liquor licenses in the state (A class C license is the only way a store can sell liquor with beer and wine). What this means is that if the Price Chopper next to the little liquor store wants to sell booze, he has to buy the license from a current holder. This should allow the small business owner a way to minimize the damage financially from the law.

The bill also would get rid of the stupid law restricting minors from ringing up beer in a grocery store - how annoying is that. Are you listening Missouri?

The only people opposed to this bill are Liquor Store owners and do-gooder teetotaler types who would outlaw alcohol if they could. This is a good law for Kansas, it will increase tax revenue, jobs, and bring prices down - not to mention reduce inconvenience to the customer.
at 10:02 AM