Mike Anderson Leaves Mizzou - Not As Significant As You Think 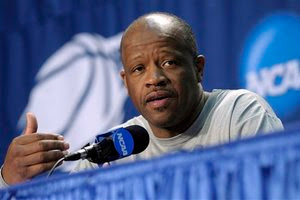 Many Missouri fans are up in arms after the news that head coach Mike Anderson will leave the program to coach the Arkansas Razorbacks. However, they really aren't losing that much. Anderson is a good guy, but in the end he is a system coach, and this season proved that he will never be able to get Mizzou to the top.
Missouri needed someone to clean up the program after the Quin Snyder debacle, and the coach has run a tight ship. In the end though, it is all about wins, and Anderson never really had a real memorable season apart from the 2008 campaign where the Tigers went 12-4 and made an Elite 8 run. Missouri has still never made a Final 4 in its program's history (which is simply embarrassing), and Anderson and Snyder both had an Elite 8 run.
Just for kicks, lets compare the two coaches:
(Big 12 record, then postseason finish)

Snyder had success when the Big 12 was at its competitive peak - Kansas, Texas, Oklahoma and Oklahoma State all crashed Final 4's and Iowa State was a dangerous team as well. I will give Anderson credit for cleaning up the program, but in the end, he hasn't really been anything special. However, there aren't a lot of sexy coaching picks out there this offseason, so Mizzou might make a coaching hire mistake, something like hiring Quin Snyder over Bill Self. Ouch.