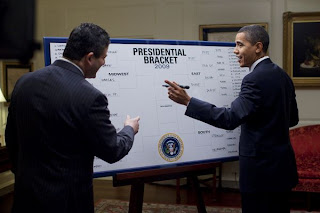 Yesterday was one of the most thrilling starts to the NCAA Tournament ever, with buzzer beaters deciding seemingly every game and plenty of upsets. In the Big 12, results were mixed - Missouri predictably got mauled by Cincinnati while Kansas State pulled out a tough win against Utah State. The results were predictable, as most fans and experts expected Missouri to continue to play terrible basketball and KState to be tested by the Aggies. Up next for the Wildcats is a tough Wisconsin team.

Today, three Big 12 teams are in action, including President Obama's pick to win it all:

We all know the story here - No 16 seed has ever won a first round matchup (although it has been close to happening a few times). The Terriers have nothing inside to match up with the Morris twins and Thomas Robinson. The Northern Iowa loss still lingers in the minds of the Jayhawks, and this one should be ugly.

Oakland has played some talented teams this year, and appears to have some weapons that could give the Longhorns trouble. Texas appears to be too deep and talented to fall to the Grizzlies, however I could see this one being a lot closer than most think. The Longhorns appear to have the talent to make a deep run, however their history under Rick Barnes suggest an early exit is more likely.

This team features two teams that hang their hat on tough, physical defense. Florida State struggles to score at times, but has a few big wins this season. This should be a low scoring, defensive affair which could come down to the last shot.
at 10:10 AM