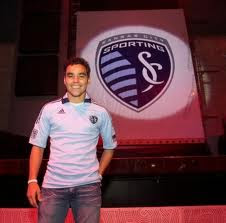 Omar Bravo introduced himself to Kansas City Soccer fans last night with two goals in the season opener in Los Angeles against Chivas USA. The 31 year old Mexican Striker was brought to Sporting Kansas City in the off season to help a club who struggled to score goals last season. Bravo has been a standout for years with Mexican club Guadalajara. Sporting went on to beat Chivas 3-2.

Beating Chivas USA may not be a monumental feat (they are the worst team in the league working under a completely new system for this season), but opening the season with a road victory is important, especially seeing as how Sporting is playing nothing but road games until June when their new stadium opens.

Starting the scoring for Sporting was newcomer C J Sapong with a goal in the game's second minute. Sapong was Sporting's first round draft pick on the off season. He is an up and coming American forward who played his college soccer at James Madison University.

While it seems the offense is in high gear, it's a little troubling to give up two goals to a Chivas team who has struggled to score goals and will continue to struggle. But lets not focus on the bad and enjoy a victory to start 2011 MLS Season. Sporting is next in action on Saturday the 26th in Chicago.
at 9:39 AM