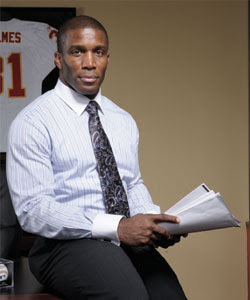 A new twist has emerged in the battle between NFL owners and players that could potentially eliminate next season's lockout. Four retired NFL players, including former Chief’s running back Priest Holmes, filed a federal class action, antitrust lawsuit against the NFL on Monday. These players hope their actions will break the NFL lockout.

One big development in this suit is the inclusion of draft-eligible prospects. College players awaiting next month’s draft are not represented by the union, and therefore cannot be held accountable for its decertification. However, the NFL lockout is affecting these players, and the suit argues that it is rediculous to hold a draft in April and then lockout the players drafted.

The suit appears to be in good hands, as it is led by attorney Michael Hausfeld of the Washington D.C.-based Hausfeld LLC. Hausfeld has a history of winning complicated cases such as this one, and could possible force the NFL owners into a corner. It is good to see that for the time being, there is some hope for an end to the lockout.
at 11:02 AM