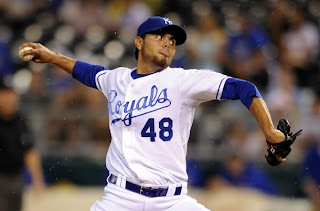 The Kansas City Royals' 2011 season officially begins this afternoon against the Los Angeles Angels. It is opening day at the K, where players and fans alike can look forward to the promise a new season brings.

Kansas City has a new opening day starter after Cy Young winner Zack Greinke was traded to the Brewers this offseason. Luke Hochevar gets the start for the Royals, and Kansas City fans never know what to expect from its former first-overall draft pick. Hochevar is as up and down as they come, but many feel he could be poised to finally break out and live up to his draft status and contract.

Recently, Kansas City turned heads as the Royals' minor league system was rated as the best in league history by Baseball America. Most fans feel this season will be another disaster in terms of wins and losses, and I would agree. The Royals are at least a year away from being able to compete for the division, but it should be fun watching the team grow.