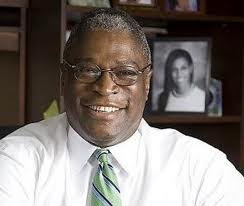 Sly James is the new mayor of Kansas City. He defeated Mike Burke by about 6,000 votes - His victory margin was particularly large in Jackson County. Turnout was a paltry 21% - about what was expected. The friendly nature of the race might have hurt turnout, or general voter apathy is a likely reason as well. It was better than the 15% turnout for the primary, however.

Though he has never been elected to political office before, James won over voters with his likable personality and his portrayal as a political outsider. He is a successful lawyer with a knack for leadership, having served as President of the Kansas City Bar Association. He had endorsements form local labor unions and hispanic organizations, as well as the Kansas City Star (whatever that was worth). Mike Burke, his opponent, was endorsed by "three former mayors", as he would tell anyone that listened - in fact, that seemed to be the only thing he said during the campaign. Congratulations Sly James, and good luck figuring out the Kansas City budget without the e-tax that will soon be defeated.
at 9:18 AM

Awesome. Time to figure out a good way to get fired and get on the Welfare!

Yes! The welfare program will be safe and sound now that James AND Cleaver are in office for Missouri. If you're working a job that pays $12 per hour or less, you would actually make MORE money going on welfare at this point, and with those two in office, the welfare program will never run out of money. Time to get fired if you can think of a clever way to do so. Or if you're a female just have some babies.