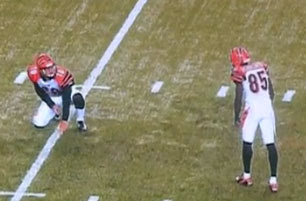 It has now been confirmed that NFL star Chad Ochocinco will be trying out for Sporting KC. Never one to shy away from the spotlight, many soccer fans are simply waving this off as yet another publicity stunt from the talented and outspoken wideout. While joining a soccer team would no doubt be a lot of fun for Chad, who has mentioned that it has always been his dream to try out for an MLS team, would it benefit Sporting KC?
It might be a crazy idea, but this could actually have a lot of benefits for Kansas City's soccer team. Look at the stir David Beckham caused when he joined MLS - both casual and die hard soccer fans across the country turned out in droves to catch a glimpse at one of the world's most recognizable athletes. Only San Jose had a lower attendance rate than Sporting KC in 2010. You wouldn't tell me the possibility of seeing Ochocinco in the game, as remote as it might be, wouldn't sell tickets?
Imagine all the buzz about the signing on ESPN, sports channels cutting to Sporting KC games anytime Ochocinco enters a game. If you think this is an exaggeration, clearly you haven't tuned into ESPN during a Brett Favre retirement saga or if an athlete or team is close to a record. The media eat this guy up, and Kansas City could reap a lot of the benefits.
I'm not saying sign Ochocinco to a huge contract and insert him in the starting lineup. However, there are plenty of times where KC could insert him in a game and not sacrifice anything in the process. Start with the preseason - Sporting KC played 12 preseason games last season. These games don't mean anything, play him some then. Let him make some cameos in regular season games that have already been decided. It might be crazy, but signing Ochocinco could be a huge cash cow for Sporting KC and the city in general. Why not take a chance?
at 8:51 PM

I wouldn't read into KC's low attendance figures over the past few seasons too much. Their temporary home (Community America Ballpark) has a fire code cap at just over 10,000. Another thought, this could possibly infuriate the "die-hards" (aka season ticket holders) by spending a roster slot and money on a publicity stunt. Lastly, this move is very risky for the league's domestic & international credibility that it has worked so hard to establish.

Also, Real Salt Lake's average attendance is just over 17,000 and they have not lost a home match for 35 consecutive games...FYI.

Yeah, but it's OCHOCINCO baby! I think it would be great.

any follow up to this story? Last I heard, the coach was going to let him play in a second string warmup match. you wouldn't want to field a whole team of Ochocinco's but he might actually perform reasonably well as a left or right back.