Toy Story 3 on Ice at Sprint Center This Weekend 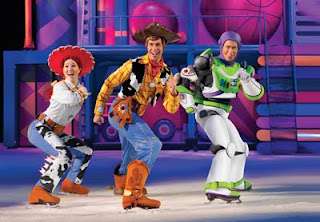 Woody, Buzz, and all their friends are appearing at the Sprint Center this weekend. Toy Story 3 on Ice opened Wednesday night and continues through Sunday with 2 shows each day Friday, Saturday, and Sunday. Good tickets are still available at Ticketmaster, or as I suggest, avoid the fees and go to the Sprint Center box office.

I attended Thursday night's show with my four year old daughter. Luckily, the crowd was not too large - getting concessions and finding our seats was a breeze. Also, there was no line for the men's restroom like there was at the women's - no surprise at a children's event. I was surprised to notice that beer was served during a kid's show, although as old and grouchy as I am it probably would have improved my mood. I ordered a $4 bottled water at the concession stand and was told I could not have the cap!?! Apparently a water bottle cap can be used as a weapon - Of course the three year old sitting in front of me had a 2-foot long plastic sword that flew towards my face every 3 minutes, and that was OK.

Anyway, as far as the show goes, it was actually quite good. The scenes were short and varied enough to keep a small child's attention for the nearly 2-hour (including intermission) show. My daughter was excited every time a new character appeared on the ice - many even dropped in from overhead. Some of the highlights include the Army men number near the beginning of the program, and my daughter REALLY liked the Barbies.

The kids really seemed to enjoy the show , and that's what's important anyway. The tickets are reasonably priced, and if you can stomach the ludicrously priced food and toys ($22 for a Buzz Lightyear Spinning toy) - or you can avoid buying any of these items - I recommend taking your little one to Toy Story 3 on Ice.
at 10:04 AM