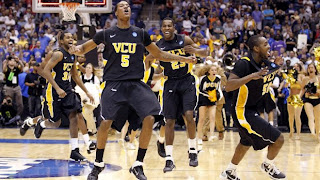 Kansas seemed poised to make it back to the Final 4 for the first time since winning the 2008 national championship, crashing the Elite 8 by dominating inferior teams and relying heavily on the offense of Marcus and Markieff Morris. Many people thought KU would walk over 11th seeded Virginia Commonwealth, and later 8th seeded Butler, to another appearance in the national title game.

Unfortunately, the Jayhawks ran into the hottest team in the country, and turned in its worse offensive performance of the season. KU fell to the rams, 71-61, and only has itself to blame. VCU played well, but KU's offensive performance was shocking. The Jayhawks shot 2 for 21 from three point range and 15 of 28 from the free throw line. Unbelievable.

There are two ways to look at this loss - on the positive side, KU was not expected to be much of a factor this season, and the Jayhawks still managed to win its seventh straight Big 12 title and make it to the Elite 8. However, KU may be losing the Morris twins to the NBA, and rumors of Josh Selby jumping to the NBA have lingered all year. If KU returns the twins, it will likely enter the polls next season ranked in the top five yet again and get another title shot in March. Should the twins jump to the NBA, KU will really struggle next year, and will likely be in a full rebuilding mode.