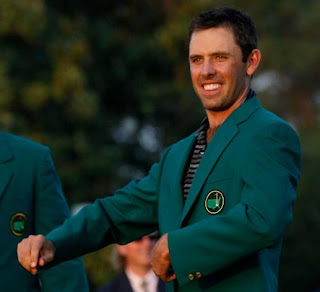 The 2011 Masters will go down as one of the wildest in history, with several storylines that weaved together to provide plenty of drama on golf's biggest stage. However, when the smoke cleared, it was Charl Schwartzel who was wearing the green jacket.

Before Schwartzel made his dominant run to claim the jacket, golf fans had gotten everything they could ever want from a Masters tournament. There was the triumphant return of Tiger Woods for starters. Woods made a furious comeback to take a share of the lead, only to run out of steam on the last nine holes. While Woods ended up tying for fourth place, the tournament was a lot more suspensful with him in the mix. If Tiger continues to improve, he may yet again be the world's best golfer. If this weekend was any indication, he is on his way.

Then there was the epic collapse of poor Rory McIlroy, the young phenom from Northern Ireland who entered the final round with a four stroke lead. McIlroy then proceeded to shoot an 8 over 80, the worst final round in Masters history for a player who entered the day with the lead. McIlroy will be back, however his collapse will sting for a long time.

While all the drama of McIlroy and Woods was hogging the headlines, Aussies Adam Scott and Jason Day silently kept playing tremendous golf. Each would finish just short, however, as Schwartzel ended up being nearly unbeatable. The South African finished his final round with four straight birdies, never letting Scott or Day sniff the lead despite their incredible play. Schwartzel is the ninth ranked golfer in the world according to ESPN, so his win wasn't too much of a surprise. However, he has now joined the elite company of golfers who own a major championship, and certainly earned it.