Federal Right to Work Legislation Introduced in the Senate 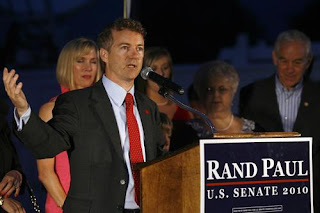 Last Month, Eight Republican Senators sponsored a bill that would institute a National "Right To Work" law. Right to work in this case means the right to work without being forced to join a union. Currently in 28 states if you work at a "Union Shop", you MUST join and pay union dues as a condition of employment. One of the sponsors, Rand Paul of Kentucky, has an online petition you can sign to show your support of the measure.
For those of you unfamiliar with Rand Paul, he is the son of long time Libertarian Congressman and perennial puddin' stirrer Ron Paul. Ron Paul is affectionately (or affectionately, depending on who you are) referred to as "Dr. No" in the House of Representatives.
Senator Paul has a description of his petition and supporting points on the conservative Party of Know website. In it, Paul asserts that forced unionization lines the pockets of Union Executives while doing little real good for the employee - drives jobs overseas - union dues pay for lavish lifestyles and political power for the corrupt few in leadership positions. Of course, Senator Paul is right, but it's a hard concept to get across to those who perceive they benefit from the system (and there are some workers who otherwise might be unemployable due to incompetence laziness, or both who do benefit). It's an emotional struggle for some who have swallowed these union ideals hook, line, and sinker to the detriment of the American Economy.

Let's take GM for example. Years of union dominance over management led to massive labor costs and benefit packages that were unsustainable. Poor management didn't help, but there is no way with the decades of success that company had that they should be bankrupted by a few years of off sales and bad management. Union pay and benefit packages are rivaled only by a government worker.

Locally, Kansas is a right to work state. Missouri is not, but the current Republican State Legislature is trying to remedy that with SB1.
at 11:16 AM