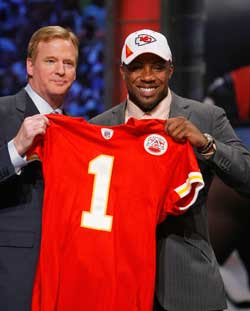 Last year, the Chiefs were able to find quality starters while adding depth, the two ingredients for any successful draft. After years of bad drafts, Kansas City now finds themselves one good draft away from having a talented core of young players mixed with capable veterans. Hopefully the Chiefs will keep the momentum going from last year's draft and hit another home run tomorrow.
at 12:05 PM

Tony Moeaki needs to be more of a feature in the playbook, with a lame duck QB like Cassell in the backfield, we need more plays that are short and easier to throw. Cassell has a difficult time going deep and every team's defense knows that. We should focus our draft picks on defense, and for our second and third pick, defense again.