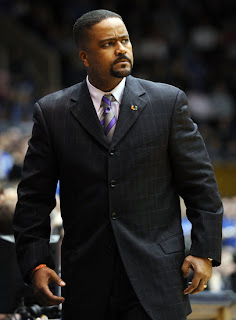 I don't understand Missouri Athletic Director Mike Alden. He goes from trying to hire one ot the top tier coaches in America, to hiring a coach who was on the verge of being forced at a mediocre (at best) basketball school. Frank Haith has coached Miami University's basketball team for 7 seasons. He's been to the NCAA Tournament a total of once. He has a 38% winning percentage in the ACC in the last 7 years - to give some perspective, that's roughly equivalent to Iowa State's performance in the Big 12 over the last 7 seasons. Not Good. Alden really fouled up this one, and there is no shortage of criticism from MU fans either.

With good reason. Even if Haith wins a National Championship at Missouri, this is a bad hire. Why? Because he doesn't have the kind of pedigree that a coach needs to be at a big time program. Obviously Alden doesn't think he has a big time basketball program - it's embarrassing. It's almost like he's settling for a guy that he likes personally and simply getting the hire over with. It's really incomprehensible.

Now what. Well, I guess the we have to give the guy a chance. By all accounts he's tremendous person - honest, loyal, family man, all that, and that does count for something. He's got a reputation as a good recruiter, and he plays a more traditional brand of basketball that Missouri is surely ready for after the Mike Anderson Era. I wish the man well, and he doesn't deserve all the negative comments coming his way, but he may just be over his head. He does give a great "mean look" though.
at 10:04 AM

This was a tragic decision. Did he even interview anyone else for the position? What about Ben Jacobson? What about Greg Marshall? It's like after Painter turned him down, Alden went out and got trashed and hooked up with the first men's basketball coach that he ran into on South Beach. Maybe by the time the curators meet, Alden will have sobered up and will beg them to annul his beer goggle blunder. We can only hope...