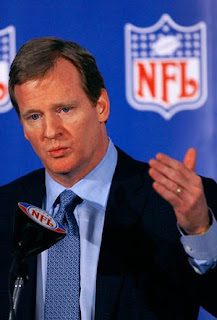 With the possibility of a lockout next season, the NFL has crafted a schedule in which there could be no games during the first three weeks of the season yet all 16 regular season games could be played. With a lockout looming as a strong possibility, this is a very smart move by the NFL to keep fans optimistic while negotiations continue.

Every game in week three features teams that share the same bye week later in the season. This allows teams to make up a missed week three during what would have been their bye week later on in the year. The league could also skip the week off between the conference championships and the superbowl, while also playing the superbowl a week later than normal. To be safe, the NFL has booked hotel rooms in Indianapolis (the site of next season's superbowl) for two weeks, in case the championship does get pushed back a week.
The regular season is scheduled to kick off September 8 with the Packers hosting the Saints. With the wrinkles in the schedule, the season's start could be delayed until October 2nd and still end February 12. Not bad at all. Kudos to the NFL for drafting an emergency plan and trying to give fans as much football as possible.
at 1:01 PM