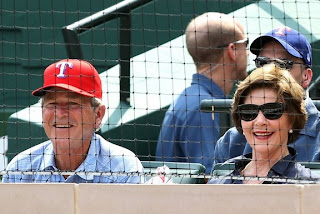 Is this the beginning of the end for the Royals? After a nice start to the 2011 campaign, Kansas City was swept over the weekend in Texas, dropping the Easter day game 8-7. As Royals fans, we are always waiting for the other show to drop, or the 15 game losing streak to begin. Though the good guys showed some signs of life, the Rangers bats were too much to contend with. The Rangers scored 22 runs in the three game series, by far the most given up by the Royals in a series this season (Cleveland scored 20 runs over a FOUR game series).

Bruce Chen was the victim on Sunday. Chen, who has been electric to start the season gave up 6 runs in 4 and a third innings - far and away his worst outing of the season and dropping his record to 3-1 on the season. A six run 5th inning by the Rangers did in the Royals, who did however mount a furious comeback in the final two frames to fall by 1. Mike Aviles hit two home runs and stole a base for his best offensive performance of the season.

The road trip continues on Tuesday with a three game set at division leading Cleveland before returning home for the weekend.

Of note: in attendance at Easter Sunday's game was former President and former Texas Rangers Owner George W Bush (pictured above).
at 10:28 AM