Spring Has Arrived in Kansas City! 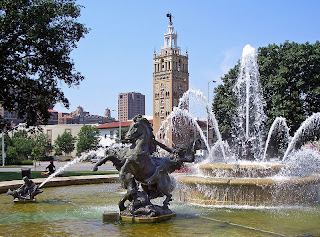 Every year Kansas City marks the coming of spring by turning on their world famous fountains. This year Fountain Day fell on April 12. Tuesday, the city turned on all but one of its 47 public fountains. The Kansas City Parks Department operates the fountains, and has been preparing for this years season for the last 3 weeks. The first fountain turned on was the Firefighters' memorial fountain located in Penn Valley Park. Built in 1991, The Firefighters' Memorial Fountain is dedicated to all fallen Firefighters, but specifically those killed in a 1988 explosion on Kansas City's East side.
Our fountains are important to our local identity, and even the logo of Kansas City has a fountain in it. The decision to incorporate fountains into the city plan started in the 1890's with the City Beautiful Movement. Unfortunately, Kansas City's oldest surviving fountain is not yet operational for this year. The Women's Leadership Fountain, built in 1899 at 9th & Paseo, had copper fittings and pipe stolen from earlier this year, and will not be repaired until later this summer. The lights were stolen from the JC Nichols Fountain on the Plaza, but the water is flowing at that site anyway.
The cost for running the fountains all summer is approximately $168,000 - part of that cost is shared by the "Friends of the Fountains" fund. And repairs to the two vandalized fountains will cost around $85,000.
at 10:00 AM