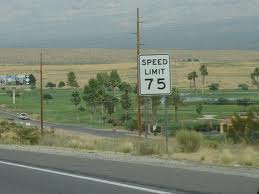 Kansas Governor Sam Brownback has signed two controversial traffic laws into effect. The State Maximum speed limit will be raised by 5 mph to 75, and motorcyclists can now run a so called "dead red" light. Both laws go into effect later this summer.

The new speed limit law will go in effect July 1, and the State Secretary of Transportation will decide which roadways qualify for the higher speeds. Estimates suggest that around 1,100 miles of Kansas Roads will see a higher limit. Opponents say that motorists already exceed the posted speed limit by 5-10 miles/hour, and this is just permission for drivers to drive as fast as 90 mph. Speed isn't necessarily dangerous, though, and most accidents are caused by distracted driving or driving too fast for weather conditions. Neighboring states (Nebraska and Oklahoma) already have 75 mph speed limits in place.
Motorcyclists can now run a "dead red" after waiting a reasonable amount of time. A "dead red" is when a red light does not change for a motorcycle because they are not large enough to set off the sensors that trigger lights to change to green. This is especially problematic late at night when few cars are on the road. Opponents argue this is just dangerous and waiting a long time at a light is worth it to stay alive, but I would contend that motorcyclists already have to be extra vigilant, and this is a common sense law. Give people some credit here. The law also applies to bicycles.
at 9:52 AM

Kansas, Built by Idiots, Lived in by Idiots said...

Speaking of the "dead red" light, the light at 119th and Roe has a malfunction. Late at night, when some stoplights are programmed to go into a different mode or whatever, this particular light won't give the green left (North) turn signal arrow. And of course we all know that for most stoplights in Kansas, when there is no turn arrow green, the light actually stays or turns red. This basically means that Kansas traffic officials think that their drivers are so stupid that they can't even tell when it's ok to turn left. In Missouri, the arrows go from a green arrow to just plain green (circle), thus allowing the drivers to decide when the fucking coast is clear and they can turn left. If you miss the green arrow in Kansas, you're just screwed until the next agonizing cycle.

One fateful night I sat at this fucking light at 119th and Roe for around 6 cycles (or light changes that go all the way around the horn). The light would not change and the idiot state of Kansas does not trust anyone to turn left using their own judgement, so I waited and waited. Finally I said fuck it and went. Sure as shit there was a Leawood cop just waiting for this and he directly pulled me over. He was about 24 years old, green, idiot, almost apologizing while he was writing me a ticket because he knew that it was bullshit. He was watching that light the whole time, hiding on a sidestreet nearby. It's probably a nightly routine for them. And sure enough when I went in to fight the ticket in court, I was immediately turned down by the fat bitch who is the city prosecutor in Leawood. She said to me "I know you're lying because I go through that light every day on my way to work". That's right you fat cunt, you do go through that light every day on your way to work....DURING THE DAYTIME.

If any of you Kansas employees are reading this you can go suck a big black dick. Oh wait, the prosecutor is a fat white lady so she probably already is.