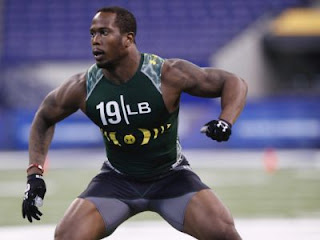 In March 2011, Miller was selected to represent top flight rookies in the NFL Labor Union talks.  He was persuaded by LaDainian Tomlinson to join the lawsuit.  Von sported goofy looking "Spike Lee" glasses at the draft ceremony and spoke of being a team player first and foremost.
at 8:15 PM