Eric Hosmer is the Real Deal 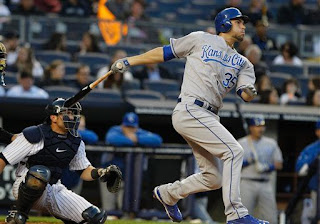 Just when it looked like the Royals' season was starting to slip away, Kansas City rebounded to take a series from the Yankees. Rookie phenom Eric Hosmer led the charge in an 11-5 beatdown at Yankee Stadium last night, blasting two homers to give him three for the series.

Hosmer had a lot of hype surrounding him when he was called up to the major leagues, and rightfully so. He was leading the minor leagues in hitting and had been billed as one of Kansas City's top prospects. How quickly he adjusted to the major leagues has many now billing him as the next big thing, and I am one of them. The guy just destroyed the Yankees in one of the biggest and most intimidating stadiums in all of sports. Clearly, he is ready for prime time, and he could be a piece the Royals build around for the next ten years - if Kansas City can hold on to him.

Hosmer's power has already had a positive effect on the rest of Kansas City's lineup. Billy Butler had four hits yesterday, and he other hitters can expect protection as long as Hosmer is blasting home runs. The Royals had a lot of guys who could hit and get on base, and the addition of a power hitter may be what pushes Kansas City's offense from good to great.

The Royals travel to Detroit today to face the Tigers' Justin Verlander, who is fresh off of tossing a no hitter. Should be a great test for Hosmer and the rest of Kansas City's offense.
at 1:39 PM