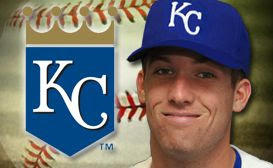 Injuries to Royals starters Kyle Davies and Bruce Chen have forced Dayton Moore to call up young gun Danny Duffy. Vin Mazzaro was seen as a possible in the rotation, but after his awful outing on Monday, the team had to look elsewhere. In the midst of a 4 game skid and a possible drop out of the division race, the Royals know something must be done with a starting rotation that is second to last in the American league in ERA.

Davies left in the first inning Monday night and went on the 15 day DL before Mazzaro's meltdown. Bruce Chen has been sidelined since last week with a strain in his back, and likely won't see action at Major League level until early June. That leaves Duffy and fellow rookie Nate Adcock to fill the void. Duffy has a 3-1 record this year at AAA Omaha, with a 3.00 ERA and 43 Strikeouts in 36 innings, he has been regarded as a top pitching prospect since being drafted in the 3rd round in 2007.


Nate Adcock was a Rule 5 draftee in the off season and has been excellent out of the bullpen this year for the Royals compiling a 2.08 ERA in 8 appearances. Adcock will likely get the start on Saturday in Davies's spot in the Rotation.
at 10:08 AM