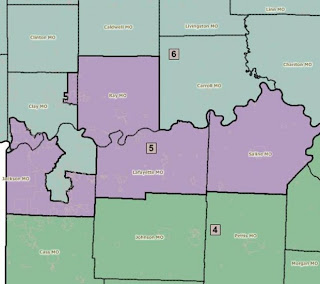 The Missouri Legislature's redrawing of US Congressional districts in the State have become law with Wednesday's override of Governor Nixon's veto. With it, a number of entertaining developments.

First, a little background. The Missouri Democratic Party as a whole was against the map because it drew out a Democratic Congressman (Russ Carnahan). Missouri's number of Representatives has dropped from 9 to 8, and the new districts create 6 strongly Republican and 2 Democrat districts - formerly there was 6 Rep and 3 Dem. The State's Legislative bodies are strongly Republican, so of course they are going to draw out a Democrat. Well, in doing so, they smartly strengthened their 6 districts and the districts of the two BLACK incumbents, namely the good Reverend Cleaver, and Lacy Clay of St Louis.

Now, enter the politics of race in the Democratic Party. Republicans in the Missouri House needed four Democratic votes to override Nixon's veto. Cleaver and Clay talked four Black State Legislators in their districts into voting for the override and against a majority of their party. Why? Because it would save their black asses if the veto stood and a Federal Court redrew the lines. Cleaver and Clay did all this while not taking Russ Carnahan's calls throughout the process. Carnahan is totally pissed, having confronted both Cleaver and Clay on the floor of the US House allegedly telling Clay "Fuck you, Thanks for the help".

Another sideshow here is the remarks of two of the black Representatives who voted for the override. Ignorant Ghetto Bitch Jamilah Nasheed stated "I'm black before I'm a Democrat" when asked why she backed overriding the Governor's veto, and Kansas City Representative and dumb as a bag of hammers Jonas Hughes stated that his "Congressman (meaning Cleaver) asked him to" vote for the override while holding back tears. What a pussy.