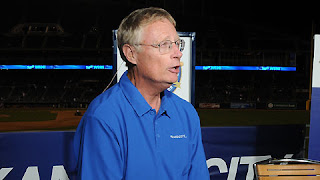 Former Royals pitcher and current announcer Paul Splittorff has been diagnosed with two forms of cancer. Splittorff, who spent his entire 15 year career with the Royals, has both oral cancer and melanoma. He was admitted to the hospital on monday.

Splittorff is one of the most decorated pitchers in Royals history. Splittorff played for Kansas City from 1970-1984, and holds club records for wins, losses, games started and innings pitched. He finished his career with an impressive 3.81 ERA and was essential to the Royals' rise from an expansion franchise to one of the premier teams of the 80's.

Since retiring, Splittorff has been in the broadcasting booth, and is currently in his 24th season as a color commentator for Fox Sports Midwest.
at 7:00 AM